I haven't really mentioned it much as I didn't want to tempt fate and have it all go horribly wrong again. But I was up on the last two attempts as not only was I healthy and un-injured (mostly) I had also had time for breakfast and a poo before setting off!!

A while back, on a run with B through Oulston we spotted a finger post pointing the way along the Foss Walk. It had a cute little frog on it.

Later that same day, while scrolling through Strava I saw that one of my other running friends had been in Oulston that same day running the Foss Walk! It was like fate...

A little research told me that the Foss Walk was a 28 mile route following the River Foss (funnily enough) from York to Easngwold. Ideal for a mini-adventure. I put it to the gang and we started planning.

Unfortunately, despite it being a recognised route, there was no map or route description available, however there was a GPX downloadable from the LDWA website so A downloaded that to his phone for navigation and we were away.

The day we picked was Saturday 8th May and it soon rolled around. The forecast was pretty rubbish, but it's often wrong, right?

It was clear when we got on the train in Thirsk, drizzle on the way to York and chucking it down by the time we were rounding the city walls on our way to the river side start point.

I can't really tell you much about the actual route as I didn't know where we were 99% of the time! We followed the river side footpaths, through houses and pasture. We saw a kingfisher, a heron and lots of cattle. We passed under the York Ring road after a few miles.

The rain just continued the whole time, varying in intensity but never actually stopping. It was also rather cold and occasionally the wind would whip up and chill us in our wet gear, quite miserable at times if I'm honest.

We had been promised cake at 28km (17.5 miles) and B had pre-arranged for his wife to collect him here. As the cake shop seemed further and further away, we began to wonder if it was real... At last though, 19 miles in, we turned off the route and down the road towards Stillington at the Pop-up Cafe at The Mill. Hurrah! Here we found tea/coffee and cake a plenty. We hogged the log burner for the best part of an hour, warming our bones and drying our gear while we ate lots of cake. They also brought out Flannigan the puppy for us to fuss, which he seemed quite happy about. As tempting as it was to stay here, we had to carry on as this was R's first ultra - but of course she needed to complete! Eventually, it time to push on, on legs that had seized up! Shuffle!

The rain eased a little in time, and we shed the extra layers we had put on at the cafe. We had a tangle with some horses this time instead of cows, flighty things. Eventually the rain stopped altogether and we were suddenly too warm in our rain coats! As the weather had improved, so had our spirits and we were noticeably more chatty than we had been in the freezing cold rain earlier in the day.

Easingwold seemed even further away than the cafe, we couldn't even see houses in the distance. We rounded Millfield Park on the outskirts of the small town, we had long crossed the 28 mile mark. At last, the green lane we were on entered the town and we found the main market place! Hurrah!

We had rung ahead for our lifts and they were waiting just round the corner, we wasted no time jumping into nice warm cars and heading home for hot drinks and baths.

30 miles complete, in 6 hours 51 mins (not including time at the cafe) R had completed her first ultra and I had a sub-6 hour marathon.

Overall, very pleased with how it went. Navigating from the GPX on A's phone worked fine, the frog signs were better in some places than others. The route is almost totally flat - only 1000ft of climb over the whole 30 miles and all of that in the last 5 miles or so. No new injuries and no real mood slumps apart from being fed up of being cold and wet. I ate more than I would normally manage, cheese and onion pastry roll things from Tesco worked well and the mid-run tea and cake definitely helped. What did I learn? Cheap dry bags are no match for 5 hours of heavy rain! I should have used the better ones AND put ALL my stuff in them.

Posted by Cackleberry at 19:14 No comments:

The pandemic continues and so does my streak! Two full years (and a few days as I am behind on posting.)

Just making a post really to see if photo uploading has improved at all, is this a viable platform etc? 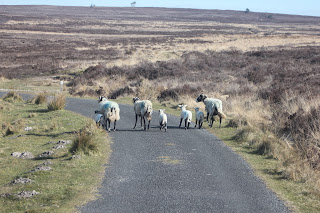 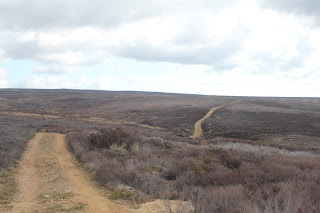 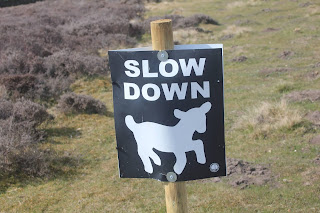 Hmm, it does work all be it slowly.

These pics are from yesterday's walk from Hutton-le-Hole.

Posted by Cackleberry at 15:12 No comments:

Email ThisBlogThis!Share to TwitterShare to FacebookShare to Pinterest
Labels: running

Yes that's right, 365 days in a row. Because... because why not?! Ron Hill ran every day for over 50 years, I keep saying I have a long way to go to catch him up :)
Ok a little bit about me.
I was never a runner when I was younger, didn't really like sport at all really. I still shudder when we do 'team games' during a warm up at Harriers!
I was however still active, going hiking with my dad and doing my Duke of Edinburgh Awards as well as horse riding as a teen.
It was Peter Wragg and Catriona Gaudie, both former Harriers who suggested I was 'tall and skinny and looked like a runner' and Peter said I should contact Rob Burn at Harriers. At this point, I had done a couple of the Cancer Research Race for Life and was almost thirty. I was in to long distance walking and had recently found out that long distance running was a thing, I'd never heard of it before but it peaked my interest. Specifically, I had read an article about a chap who had run the Cleveland Way in under 24 hours. I had hiked it in a week, it seemed incredible.
I contacted Rob and he talked me in to coming down to a training session, I'm not sure I even owned any lycra when I first turned up at the school sports hall, I certainly couldn't run very far, I had been practising a little and could manage a half mile chunk before needing a walk break. The Harriers took me under their wings, I was made to feel very welcome and I was hooked straight away. I completed my first Christmas Handicap a month later, running the full two miles without stopping and came in second place! By February 2011 I was competing at Cross Country. I enjoyed the muddy fields more than tarmac and I was learning more about trail and fell running, although I was yet to try it out.
It still took a long time to learn to love running, it was hard. It still is hard, but I enjoyed the physical effort and gradual improvement. All the time making friends and getting involved in the social aspect of being part of a running club. I was also involved behind the scenes as Club Secretary for 7 years, only stepping down in 2019.
Gradually, I was doing more off road stuff and that it where my passion lies, I don't know when it clicked, but suddenly I loved running! Getting the typical running grumpiness if I couldn't get out and exercise.
I did my first fell race, Gribdale Gallop, in the summer of 2011. I was so nervous, I remember shaking like a leaf on the start line. But I got round in one piece and never looked back! But I wanted to go further. I'm not fast, never have been, so distance and technical ground became my 'thing' relishing big hills and muddy terrain. A year later I completed my first marathon the Osmotherly Pheonix, a pretty tough route to start with!!
From there, with a lot of help from the Club and my running friends, I have gone on to complete multiple marathons and several ultra races, the longest so far being 55 miles and all off-road. I have made attempts at a 100 mile race, but a finish at that distance so far eludes me. The training involved for that is long and gruelling and takes over your life.
Currently, I have been 'streaking' which doesn't mean running with no clothes on! No, following in the footsteps of the legendary Ron Hill, I've run every day for just over a year. The rules are simple, it has to be at least a mile, and it has to be quicker than a 15 minute mile. I've done this before, but been stopped by injury, or illness or just 'life' getting in the way. This time however, I am pleased to make it to (and now past) 365 days. I'll keep going until I am forced to stop, but I am enjoying the challenge, every day is a new opportunity.
The running community has introduced me to things I didn't know existed, I've been to places not seen by many and experienced such highs you'd think I was on drugs! The friendships that evolve from running with someone for hours on end, through the night and seeing each other at our most vulnerable are without comparison.
And all because I made that phone call to Rob one evening to 'ask about running Club'.

Posted by Cackleberry at 07:31 No comments:

It promised to be another warm one, so we walked the dog early, down to the Concrete Road and along the edge of town. I wanted to go that way to eliminate quite a few FetchPoint bugs, 12 as it turned out.

We then tried to go to what we thought was the garden centre at Baldersby, but it's not, it's a wholesale place. So that was no good!
On the way back through town, Paul called in to get his hair cut, came out with a new 'do'! Then on to the Thirsk Garden Centre where we bought compost and plants.

Lunch at home before spending the afternoon in the garden. It was very warm, getting up to 30 degrees on the patio.

I did the first day of Adriene's 30 day yoga programme.

It was too hot for the planned roast dinner, so I cooked the chicken and we had salad instead, it was the right idea!
Posted by Cackleberry at 06:28 No comments:

Posted by Cackleberry at 12:56 No comments: