It's the wrong legs, Gromit!

Wrong legs indeed, don't know what I've done with my fit ones...
After a fairly leisurely weekend, I thought I may be well rested for this weeks long-ish run. I was running from home today and had the choice of a hilly route or a flat one. I took the flat one and it was quickly obvious that was the right choice!
From the outset, my legs were tired, very tired. I had the route in mind, but hadn't measured it. There were options to shorten it along the way, but I thought I'd see how I felt.
A couple of miles in, everything had loosened up and I was bombing along! Didn't last long mind and every stride was an effort. Too many walk breaks and too many excuses to stop for some reason or another.
I did consider chopping off a loop, but decided I wanted time on feet so did the full route.
I find it slightly ironic that if I run into town, I can get in more off-road stuff than if I run the other way, towards the moor. (I live just 5-6 miles from the boundary of the North York Moors)
So, I struggled and shuffled on. The last 3 miles or so took a very long time and it started to rain as well. I got home just as the heavens opened!

When I measured my route it was over 13miles so that was ok.

I used my S!CAPS today, no idea if it made any difference or not as I don't think I was working hard enough to induce cramp... I ate all my sweets and my cheese biscuits too. I was thinking as running, I have a couple of gels I've acquired from various places (not tried one yet, don't really fancy them) and when I read the packet it says to consume one every 20 mins or so! Surely not? I shall continue experimenting with eating 'real food' while running thank you very much.

I think part of todays leg tiredness was due to last weeks mileage, but also a lot to do with not having eaten properly yesterday. Weekends just seem to mess me up!

Also, another question, related to running nutrition, is it better to 'front load' or replace the calories afterwards? Todays run burnt over 1500 extra cals and there's no way I can eat that much extra after a long run. I'm talking straight calories here, not what kind of food do you eat. So many things to tinker with!
Posted by Cackleberry at 14:46 No comments:

Yeah, been watching to much Star Trek...

I have made the decision to try taking some supplemements, I already take cod liver oil and Glucosamine, but I've added in iron and vitB12. I do all the healthy eating, exercise (dhur) and drinking plenty of fluids but rarely feel full of energy. So, I thought I'd give them a whirl. I just wondered how long before I notice a difference? I've been taking them a full week and as yet don't feel overflowing with vim and vigour. Maybe it just doesn't work like that? I'd like to hear if any of you have had experience with such things.

On a similar note, I have also got hold of some S!CAPS electrolyte replacement capsules in an attempt to stop me throwing up on long runs. I've tried eating real food as I didn't want to take supplements for running, but I just can't physically eat enough to stop it.

I don't like the idea of taking any of the above supplements by the way, I'm a big advocate of being all natural. But, I know I don't get enough iron in my daily diet (liver and kale anyone?) and B12 goes hand in hand with that. And bonking on a long run is just dammed unpleasant. I'm also happy to wait and give the B12 time to work, just don't want to give up too early if you know what I mean!

Anyway, a medium run is calling and it's raining. nice.
Posted by Cackleberry at 03:47 No comments:

Running today was abandoned in favour of a catch up with a friend and cake!
My friend has spent the last 6 months working 'darn sarf' and has now returned to God's Country. So we met up this afternoon and went for a walk round town before having CAKE. We have a good system, we each choose a cake, then halve both. Today it was Dark Chocolate and Cherry Rocky Road combined with spiced marmalade loaf. Both rather good with a nice cup of tea.
I also came away up two marrows!

All this took place at the Rural Arts Centre in Thirsk. Check out their café, shop and gallery.

http://www.ruralarts.org/
Posted by Cackleberry at 11:46 No comments:

Email ThisBlogThis!Share to TwitterShare to FacebookShare to Pinterest
Labels: walking

The week has gone well, so far at least!

Last Saturday I managed for possibly the first time ever to get up and run BEFORE work! I knew I wasn't going to have time after for various reasons, so pre-breakfast it was. It felt stiff and clumpy, but the early morning sun and mist over the fields made it better and I felt more awake for the rest of the day than I had done all week previously.

Sunday was no real exercise as we had step-daughter over.

Monday I had a long run planned, car repairs conspired to get in my way, but the garage couldn't fit me in til Tuesday so I had no more excuses! Rucked up and f*cked off to Osmotherly. From there, I followed the Cleveland Way along Rueberry Lane and over Beacon Hill onto Scarth Nick Moor, love it up there. Into Clain Wood and down the incline and through the trees. Then, over two fords in quick succession and along lanes to the farmstead of Scugdale. I knew there was a big climb to come in the form of Live Moor, but apart from the flagged path being quite slippery underfoot, it wasn't that bad. The moor top path climbs gradually all the way to the summit of Carlton Bank, before dropping sharply on more slippy flags and passing into the grounds of Lord Stones. The café and facilities here are being done up and they look like they'll be good!


I found the stone circle at Lord Stones, something I've never noticed before and did my Team We Love a Challenge burpees (don't ask) and had a munch on a cereal bar. It was cold and windy here.
I turned to retrace my steps. Steep climb back up Carlton Bank, pausing to chat to some American ladies (presumably on holiday) who thought my 15 mile run was quite amazing!


Back to Scugdale was pretty much all downhill and quite relaxed. I stopped at one of the fords beyond the farmstead to wash sweaty arms and face and get the salt out of my eyes (stingy) then carried on back into the woods. The incline in Clain Wood was a beast and I made no attempt to run up it, walking was tiring enough! Another climb, the reverse of Scarth Nick Moor is quite taxing and I walked on and off here.


The descent however was much better, although I was aware my legs were starting to get a little crampy. At the bottom of Beacon Hill was a patch of blackberries, so I paused for some in-run-nutrition and almost ate a ladybird- not to be recommended!! A handful of sweeties took the foul taste away and I carried on. Some hikers looked very displeased that I'd run through a field of cattle and they were all following me like the pied piper, as I ran on up the hill I could see them still dithering about what to do. At last, the final descent into Osmotherly. I gave the pub a miss as I had to drive home, settling instead on a pint of tea when I got back.


Tuesday was a rest day, but I got an hours walking in with the dog while the car was at the garage.

Wednesday is Harriers training. Usual night, 2 sets of circuits then outside for intervals, 4x 4mins tonight. All the people I normally run with were absent and it was odd running by myself.
After training, we had our club AGM. It was very civilised and all over in just half an hour! Being club Secretary, I'd spent weeks planning and organising, but I'm glad it went smoothly.

Thursday and it was time to run in the rain, wind, cold and dark with buddy HC. I ran down to her house first, then we go out along the local lanes before cutting back through town. Didn't seem to matter which way we turned, we always had a headwind! To make matters more 'interesting' I'd left my head torch at HC's house with my dry clothes, so we had one torch between two. Oh well, all makes for a good adventure! And of course we called in for a pint afterwards...

Well, it seems this place needs an overhaul and bringing up to speed!

Basically, still running and what not. Training for one of Jon Steele's Harmoors Marathons, from Goathland this time. That's in November, so not long really! 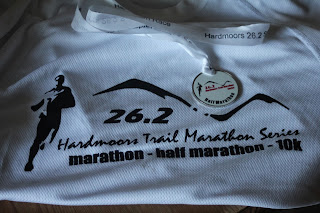 That was from Saltburn Half, where I crashed and burned, so lets hope I do better this time!

Posted by Cackleberry at 02:04 No comments: