Dragons, not the Sutton Bank TT and rainbows in the rain at Thirsk.

Second HDSRL fixture for 2015 was hosted by Dragon Aire at Yeadon, near Leeds. I was told this was an off road course and that I would enjoy it! We got there with time to walk from the cricket club down through town to the start and to get warmed up. I can't remember the course in detail, but it was very much off road! A lot of downhill to start, plenty of tree roots and rocks to play on, alongside 'Europe's Largest Sewerage Plant' then back up a stiff climb in the woods. I loved it! Every minute pretty much. Each time the marshals called for us to slow down, tree roots I was able to speed up! I was overtaking people all through the race, which is unusual for me! Managed to overtake Claire on the big climb and I didn't see her again until the finish. Only down side was there wasn't enough mud!!
The hosting club did a grand job and there was a feast at the cricket club! Sandwiches, cakes, chicken legs, pizza, crisps, sausages etc etc. Big pan of chips with a stack of bread and butter for making chip butties... I ate more calories than I ran!!

At the end of the month the club holds a time trial over 2 miles. In the summer we tend to go up to Sutton Bank for this. I decided that if I am going to get back on track with Ultra training, then a longer run would be more beneficial. Hilary was in agreement and so it was I ran down to her house on the far side of town, together we ran round Sowerby Fields, checking out the route for our HDSRL fixture, then I ran back home again. 9.4 miles clocked up in total, and on a school night!!

More recently, it was time for our club to host the HDSRL. I had agreed to be sweeper on foot, I also bought the paper plates and about a 100-weight of crisps for the buffet afterwards!
I dropped all that off and jogged down to the start area where I found my friend Sarah who I hadn't seen in ages, so that was good! People were still arriving as the start whistle blew, a couple of guys taking their time in the loo, so I had a sprint with them to catch up with the main pack. Then I realised there were still people joining the race, so I stood aside and waited for everyone to catch up. At long last they did, and so I had another faster than expected run to reach the back of the race. Here I found Marian, one of Thirsk's own bringing up the rear so I slowed down and ran with her for the race. The course consisted of two laps and we were lapped by the leading runners! We'd almost finished when the heavens opened! Sideways rain and hail, yuk yuk yuk but it was coupled by a glorious double rainbow! Marian made it to the finish, accompanied not only by me, but by several other marshalls and hangers on that we'd collected along the way! 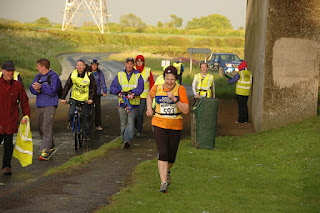 Back at the club house, out of the rain, we had a great pile of sandwiches and sausage rolls and the all important buns in club colours, I think made by the Coy family!

There has also been club training, Thursday night fun in the woods with the forest people and a Sunday morning run on Sutton Bank with Basil. I have a marathon next weekend and another Ultra in September. I am not ready for either...
Posted by Cackleberry at 17:15