The Summer Season has started!

I made the right decision not to run last Sunday. The conditions were 'epic' (which translates to cold wet and windy and quite horrid) and on Monday I felt dreadful. I was dragged round Wickes in search of DIY supplies for the ongoing decorating project at home.

Thankfully I had perked up a bit by Tuesday and felt able to participate in the opening fixture of the Harrogate Evening League (HDSRL) held rather fittingly at Harrogate! At the last moment I had thrown an extra T-shirt into my back and I was glad I had as it was cold and windy on the Birkenwith Industrial Estate. I didn't have a plan in mind other than to just get round and run to feel, seeing as I had a cold and this was my first fast outing since the HM55.
Soon after the start, the stitch started. Gosh it hurt. The uphills were hard work and they're quite tough climbs but at least they didn't aggravate the stitch, unlike the fast steep downhills. The (very) short stretch of 'off road' was welcome and I over took a few people who were fannying about in the tiny bit of water and mud and straight into the next big hill. I had been leap-frogging with Claire a lot of the way round and I had to overcoming a spinning head and reeling tummy to get past her on this climb. She too had stitch and the pair of us ran with fingers dug into our ribs!
On the home straight however, she came past me again and I had nothing left to catch her, I just had to watch her go and I was a little cross. Not with Claire as she has worked so hard and made such an improvement with her running, but with myself because I should be able to beat her. But, that's a matter for another day and now I just enjoyed my post race water and quickly got changed as it began to rain. 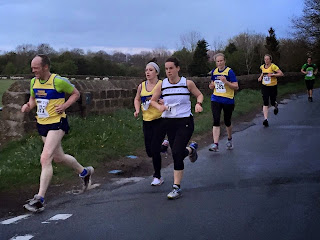 Wednesday, another day, another league, another race! This time a fell race held out on Carlton Bank and the opening race of the Esk Valley Summer Series. This is a favourite of mine, but I wasn't looking forward to it. I was tired from last night and the lingering cold, my muscles still hurt from yesterday's stitch and I was dreading it coming on again. It was also much cooler tonight and I set off wearing too many layers! My waterproof and gloves came off within the first couple of miles and I was still a bit warm, but I kept my other top on as it protected me from the wind up on the moor.
From the start I was stuck behind a couple of other women, this first stretch is good fun but is very narrow with very limited passing opportunity. As it was, I felt I wasn't running fast enough but every time I upped the effort, I was rewarded with the stabbing pain of the stitch. I had to make do with where I was. At last we reached the woods and a very steep decsent, and the other two women pulled away, Pat almost got away from too but I reeled her in after the drop! There were a couple of hills in the woods that I had forgotten about and I overtook one of the women before we got to the main climb on the Cleveland Way. Up Live Moor and onto Round Hill then all the way along to the double trig point of Carlton Bank. The flags weren't too wet, first I passed Alan from club then at last caught and passed the other lady from earlier. I didn't feel too bad now and could run most of the return leg, the stitch seemed to have subsided quite a bit now.
After touching the trig comes the horrible fast descent, first on the flagged steps then on a corner you hop the barbed wire fence (of course I got snagged on it!) then follow the sheep trods down over the tips and hopefully emerge at the finish! I did have a couple of runners in my sight trying to establish where the race line was, but I think I missed it as I ended up on a near vertical bank sliding down heather on my bum!! As I hit the bottom, just a short distance to go, the second lady I passed emerged on the flagged path to my right! Oh no! There was no way she was going to beat me so I ran like hell on the narrow path across the heather and made sure I beat her to the gate! I was going to congratulate her (as we had chatted during the race) but she didn't hang around.

There had been a good turn out tonight, we had a full men's team for a change consisting of Alan W, Steve M, Duncan and Pete W. We also had two ladies teams Lorraine, Hilary and Carol making up the A team, with me, Pat and a 'ghost' being the B team.

No rest for the wicked! Back out again on Thursday night for a run round Kilburn Woods. There was another big turn out, including some new club members who didn't even stop to say hello...hmm. There was quite a range of abilities so we split into smaller groups and the fast lads went for an eyeballs out blast round the trails. We had a more sedate plod around and enjoyed the evening sunshine. Must admit I was tired at the end of this run and glad I had a couple of rest days coming up.

In 'Nature News' I am glad the swallows are still here, I was beginning to wonder if they had stayed. The bluebells look lovely in the woods and in my garden, I just wish the temperature would get a little more summer like!
Posted by Cackleberry at 18:47