A 9mile undulating walk over farmland, through woods and along the coast.

We managed to get parked opposite the Brown Cow pub in Hinderwell, but to our dismay it looked rather 'closed' with a for sale sign outside! Oh no! We'd hoped to have our dinner there after the walk. There is another pub, The Badger Hound, just a few doors down so we checked to see if dogs were allowed in. They were so we thought we'd eat there instead.
Shortly after passing the Badger Hound, we took a side road and followed this out to the cliff tops by Port Mulgrave.

Once we reached the edge, we turned left to join the Cleveland Way. The path follows the cliff tops, undulating gently for about 1 ½ miles to the little fishing village of Straithes. The path drops sharply to sea level in Staithes, coming right to the sea front.

Staithes is a quaint little place, now more of a holiday destination than the thriving fishing village it once was. The myriad of steps, ginnels and little alleys being perfect for the smugglers that once haunted this coast.
Up through these steps and narrow passages we went, leaving the Cleveland Way but also missing our intended path! We hit the main road in (new) Staithes by the Co-Operative, and from there regained our route!
We took a track leading along a fence and passed a very nice farmstead before dropping into Oakrigg Wood. There are many paths in the woods, but we stuck mainly to the beck side, before climbing muddy paths to meet a field boundary further on. This led on to a good farm track which took us into the tiny hamlet of Newton Mulgrave.


Through Newton Mulgrave and onto more tracks towards Ellerby. One field was completely planted with no discernible path across, which meant we took a while finding the little wooden footbridge and stile over into the next field! But we did find it and soon we were at Ellerby.
The Inn there was not dog friendly so we pressed on. We crossed the A174 and took another muddy track across fields till we met a minor road called Coverdale Lane. This started off well, but as it began to drop down to the beach, it got muddier and wetter! 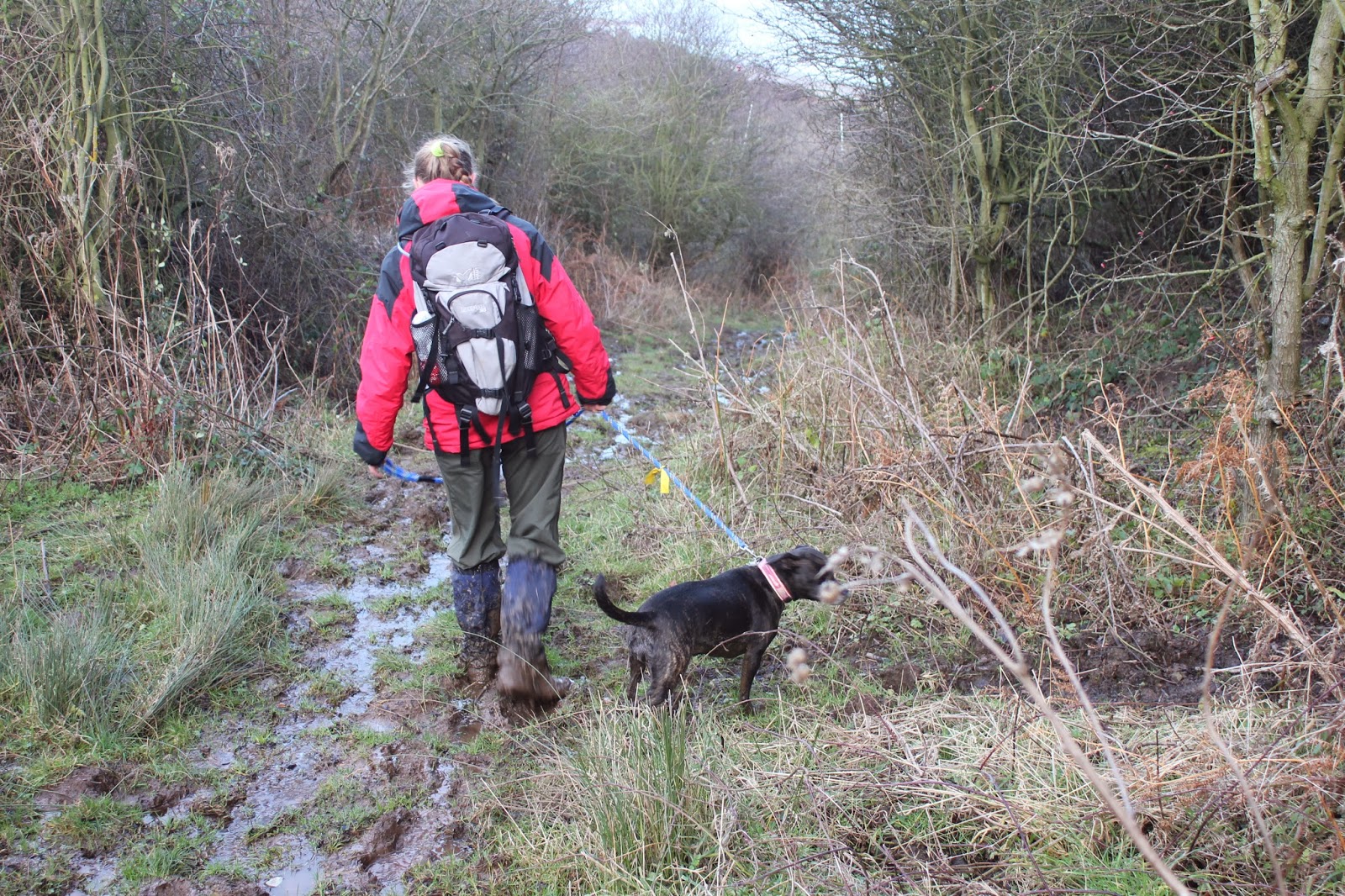 At last we popped out onto the beach at Runswick. Too many dogs to let Tammy have a run off the lead and the coffee shop was closed.
Next, we tackled the very steep climb out of Runswick, then just 1 mile of flat pavement to return to Hinderwell.
We were both very pleased to see the Brown Cow was open after all! So, we got our muddy boots and gaiters off, I towelled the dog down and we went in for food and beer. I had chillie-con-carne with rice and chips, and Paul had pie with chips and veg. Tammy had a Jumbone and a few chunks of steak out of Paul's pie.

Posted by Cackleberry at 14:50

Email ThisBlogThis!Share to TwitterShare to FacebookShare to Pinterest
Labels: walking